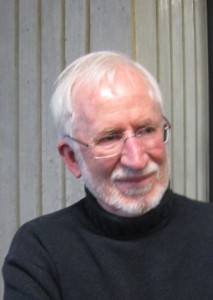 As a former analyst (1976-2012) with the External Assessments Bureau, Department of Prime Minister and Cabinet, Ken comments: “Our prime ministers are the most important players projecting New Zealand globally. I have watched them for the past five decades, usually from a vantage point of close proximity, in the role of informing them about current global developments.”

Wellington researcher Ken Ross is writing a book evaluating the 15 New Zealand prime ministers since 1945 from the perspective of their engagement in global diplomacy. His public lecture at the National Library of New Zealand on Wednesday, 17 June drew a full house for his topic: “David Lange’s ‘diplomatic’ journey from the Oxford Union to Yale”.

Ken summed up Lange’s chequered performance to rate him as our second best prime minister in stamping our mark internationally since 1945 – behind Norman Kirk. His comparisons between Lange, Kirk and Helen Clark produced lively debate during the question time which followed his talk.

Reflecting on David Lange’s global diplomacy while prime minister, Ken Ross argued that Lange was held in higher regard internationally for his diplomatic achievements than he was on the home front. Ken’s talk highlighted significant moments when Lange showed his strengths, as in his handling of the bombing of the Rainbow Warrior on 10 July 1985 – almost 30 years ago.