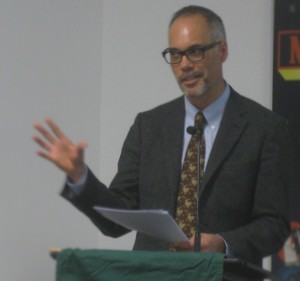 Paul Diamond speaking at the National Library on 19 November

Paul Diamond, Curator Maori at the Turnbull Library, talked about the current exhibition in the Turnbull Gallery, “Not One More Acre …”, commemorating the Land March of 1975. The emphasis was on photographs, starting with the “defining image” of Whina Cooper and her mokopuna, as Paul explained the enormous significance of more than 250 colour photographs taken by an American, Christian Heidegg, which were donated to the Turnbull but are now serving an important new role in jogging memories and helping illuminate the sequence of events and the simultaneous process of consciousness-raising which occurred.