A research project into the childhood and early life of Katherine Mansfield has won the 2015 Friends of the Turnbull Library (FoTL) Research Grant of $10,000.

Dr Gerri Kimber (pictured below right) is a leading UK authority on Katherine Mansfield. She has been working on a new biography of Katherine Mansfield’s early years and has already located previously unpublished material relating to her first 19 years in New Zealand. Dr Kimber will use the FoTL Research Grant to explore the collections of Wellington’s Alexander Turnbull Library, which is renowned for its substantial archives concerning Mansfield. This material includes the recently acquired literary and personal papers from the estate of John Middleton Murry, Mansfield’s husband.

Dr Kimber expects to complete the biography in 2015, and her book is to be published by the Edinburgh University Press.

Rolf Brednich, who has been researching a biography of the German-born New Zealander Augustus Koch (1834-1901), spoke about his life and work at a meeting of the Friends of the Turnbull Library on Tuesday 21 October.

Koch first visited New Zealand as a seaman on a sailing ship in 1855. He returned in 1858, bringing a printing press so that he could produce prints of his own artwork, and settled in Auckland with his bride. Within a few months he became known to other European New Zealanders – Dr Karl Fisher, Dr Ferdinand Hochstetter and Julius Haast – and subsequently joined the Austrian Novara Expedition as meteorological observer and later mapmaker.

Rolf Brednich retired from a long involvement in ethnology and folklore, and turned his attention to Koch’s remarkable immigrant career. Realising that this story needed to be documented, he has spent several years working on the biography which is to be published soon by Steele Roberts. It will include many of Koch’s sketches held in the collections of the Alexander Turnbull Library. 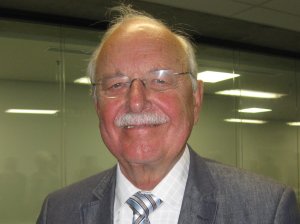