APPLICATION FORM 2023: FYI This is the form to attach to your full application as outlined below.

Send by email to turnbullfriends@gmail.com

INFORMATION TO BE PROVIDED BY APPLICANTS INCLUDES:

1) A brief description of the scope and nature of the research work – setting out its aims and significance, its research plan, and the methods and techniques to be employed.

2) A statement of the relevance of the Alexander Turnbull Library collections for your proposed research. If possible, you should provide specific information about the book collections or special materials (manuscripts, maps, photographs, etc) on which the proposed research will be based. Please indicate how much time (days, weeks or months) you expect to spend in the Turnbull Library.

3) An outline of your current state of progress on this research project and your estimated completion date.

4) Brief details of any other source of funding (received or pending) for the proposed research project.

5) A brief statement of the proposed form of dissemination of the results of your research, e.g. publication in book or serial, exhibition, lectures, film, etc.

6) Your curriculum vitae, including nominated referees and relevant educational and research achievements and any previous publications.

1) The FoTL Research Grant (up to NZ$20,000) will be made to the approved applicant(s) to carry out a piece of research where there is significant use of the ATL collections. This does not preclude the use of other collections.

2) The grant may be split between more than one applicant, and payment may be made in lump sum or instalments, according to the decision of the FoTL Committee.

3) Applicants do not have to be New Zealand citizens.

4) The grant will not normally be awarded for research towards a university degree.

5) Nominated referees will be contacted for all short-listed applicants, to confirm that the applicant has the necessary skills and background to complete and present the research satisfactorily.

6) Applicants will be notified of the Committee’s decision on or before 30 November 2022.

7) Recipients will be required to submit a progress report by 31 October 2023.

8) Recipients will agree to publicity related to the FoTL Research Grant.

9) Recipients may be asked to address a meeting of Friends on the research topic, and/or to provide a report for publication in the Friends’ regular periodicals.

The 2022 Research Grant was shared between two researchers:

Wellington biographer Sarah Gaitanos was awarded a research grant to assist her to complete a biography of Brigadier Reginald Miles, an important, heroic, largely forgotten New Zealand soldier, with a working title of “Now Cracks a Noble Heart”.

Dunedin researcher Dr Claire Macindoe was awarded a research grant towards her proposed book on Dr H B Turbott, who became an important and popular health broadcaster during his forty-year tenure as the ‘Radio Doctor’. 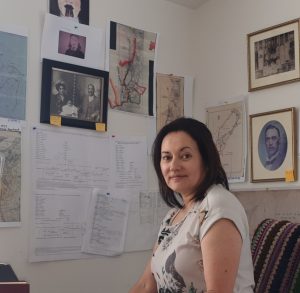 Wellington researcher Pania Te Whāiti (Ngāti Kahungunu, Rangitaane, Ngāti Toa, Kāi Tahu) was awarded the Research Grant for her project “Kaumātua Kōrero: The diaries of Iraia te-Ama-o-te-Rangi Te Whāiti”. She plans to tell the story of Iraia te-Ama-o-te-Rangi Te Whāiti, a kaumātua and rangatira of South Wairarapa. The diaries begin in 1890 when Iraia, a 22-year-old farmer, is intent on developing a successful farming business and buying back his ancestral lands to provide for his hapū. Up until his death in the influenza pandemic of 1918, he recorded his activities and thoughts in notebooks – often in haste, on the road, early in the morning or late at night. This working record in te reo of the life of a busy farmer is now in the collections of the Alexander Turnbull Library, supplemented with maps, whakapapa, photographs and letters.

Against the backdrop of the influential prophet Pāora Te Potangaroa, Iraia’s story tells of the alienation of Wairarapa land by the Crown, the alienation of the Wairarapa Lakes, the printing of the Te Puke Ki Hikurangi newspaper, the Kotahitanga Political movement, the Great War, and the illnesses that devastated the Māori population, ending with the 1918 pandemic.

Convenor of the selection panel, Dr Robin Skinner, said that Pania’s project highlights the role of the Alexander Turnbull Library as a priceless research resource and a safe repository for Māori taonga.

Literary scholar and writer Sarah Shieff received the 2020 research grant to assist her latest project, to publish a collection of the letters of poet Allen Curnow ONZ CBE (1911-2001). Noting that Allen Curnow is widely recognised as New Zealand’s most distinguished poet, Sarah aims to “tell the story of his long life in his own words”. She believes that publishing his letters will go some way to make up for the fact that he never wrote his own autobiography.

Sarah Shieff is Associate Professor of English in the School of Arts, University of Waikato. She has previously published Letters of Frank Sargeson (Random House, 2012), and her Letters of Denis Glover (Otago University Press, 2020) is forthcoming. For more information, see LITERARY LETTERS TO RECEIVE FUNDING

Background to the Research Grant

In 2003 the Friends of the Turnbull, using a substantial bequest from David Bilbrough, established an annual grant for researchers who plan to make significant use of the collections of the Alexander Turnbull Library. No research grant was awarded for two years during renovations to the National Library but it has been offered each year since 2012.

The grant is intended to emphasise the distinctive contribution that a research and heritage library makes to public knowledge. It celebrates the significant role of ongoing research and publication based on the Turnbull Library collections and the knowledge of the staff.

From 2007 to 2016, thanks to the generous bequest of Wesley (“Bill”) Secker, the Friends were able to increase the size of the annual research grant to NZ$10,000. From 2017 to 2019, the grant was increased again to $15,000. Now generous donations in celebration of the 80th birthday of the Friends of the Turnbull Library, and in the CENTENARY YEAR OF THE OPENING OF THE TURNBULL LIBRARY IN 1920 have enabled us to provide more research funding!

Two research grants were awarded for 2019. Wellington writer and broadcaster Nick Bollinger – author of the acclaimed Goneville: a memoir, published by Awa Press (2016) – is working on a project to chronicle the development of the counterculture in New Zealand during the years 1960-1975. He says the term counterculture became widely used in the 1960s to identify a range of groups and individuals – from Baxter’s poetry to the music of Blerta, from Roger Donaldson (Sleeping Dogs) to Tim Shadbolt (Bullshit and Jellybeans) – broadly sharing a belief in an alternative society. He will be drawing on the rich and diverse collections of the Turnbull Library to trace the roots of countercultural ideas, how they evolved and how they affected New Zealand society.

Co-recipient Dr Vincent O’Malley receives a second grant to continue his ongoing work on a book on the New Zealand Wars, aimed at a secondary schools market. He is the author of The Great War for New Zealand (see below).

In 2018, the recipients were:  Wellington historian Dr Vincent O’Malley – whose fine book The Great War for New Zealand: Waikato 1800-2000, was published by Bridget Williams Books in 2016 – received a research grant to assist him to begin work on a book on the New Zealand Wars aimed at secondary school students as well as a general market. And Auckland dress historian Angela Lassig received a research grant towards the publication of an illustrated book on the history of women’s dress in nineteenth century New Zealand. Ms Lassig has drawn almost all her material from the rich and diverse collections of the Turnbull Library. She will be making use of letters and diaries, cartoons and advertisements, sketchbooks and photographs, to create an accessible social history for the study and enjoyment of New Zealand women’s dress and textile heritage.

The 2017 grant was awarded to Ryan Bodman of Auckland, whose project is a history of rugby league in

New Zealand. Ryan’s research at the Alexander Turnbull Library includes the oral history archives and the photographic collections. His book will consider aspects of social class and links with marginalised communities as well as sport.

The 2016 grant was awarded to Dr Jarrod Gilbert of Christchurch, to research a book, “Murder: A New Zealand History”. He will chronicle specific case studies to illustrate the crime of murder as a means of shedding light on New Zealanders’ relationship with violence.

The 2015 grant was awarded to Dr Gerri Kimber, a UK researcher, who has produced a book about Katherine Mansfield, titled “Katherine Mansfield: The Early Years”. Dr Kimber was in New Zealand in August 2015 (see Public Programme).

The 2014 grant was awarded to Lucy Treep of Auckland, who is working on a biography of Maurice Shadbolt.

Since its establishment in 2003, other recipients of the grant are: