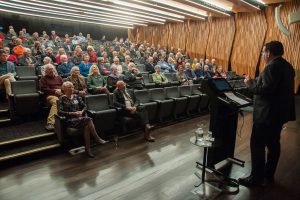 The Friends of the Turnbull Library (FoTL) offers a monthly programme of public talks that are free to all, and held – unless otherwise indicated below – in Taiwhanga Kawhau, the Auditorium on the Lower Ground floor, National Library of New Zealand Te Puna Mātauranga o Aotearoa, (corner of Aitken and Molesworth streets, Thorndon, Wellington).

We have occasional public talks in Auckland, with the next talk to be held at Takapuna Public Library in The Strand. See FoTL Public Talks in Auckland

Our programme of public talks is free and open to all.

Tooth and Veil: The life and times of the New Zealand dental nurse 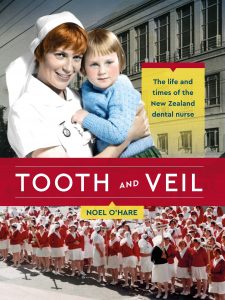 Freelance journalist Noel O’Hare will talk about the School Dental Service (established 100 years ago in 1921) and the young women who worked as dental nurses in schools, enduring inferior conditions of low pay, a military style of management, and inadequate and antiquated equipment for more than 50 years.

Born in Northern Ireland, Noel O’Hare has lived and worked in New Zealand since the early 1970s, becoming a staff writer for the NZ Listener in the 1980s. He is the author of Think before you Swallow: The art of staying healthy in a health-obsessed world (2007) and How to Save the World by Recycling Your Sex Toys (2009). Until recently, he worked as a researcher and writer for the Public Service Association.

Crossing the Lines: A new history of New Zealand soldiers in WWII

Brent Coutts reveals a previously untold history of homosexual soldiers in World War II, drawing on the experience of Harold Robinson, Ralph Dyer and Douglas Morison, who were female impersonators in the Tui and Pacific Kiwi Concert Parties. From the men’s formative pre-war lives, through the difficult war years to their experiences in a post-war London, Coutts presents a story of strong friendships, a shared queer identity and love of performance, along with the search for love and belonging as homosexuals within both the civilian and military worlds. Incorporating contrasting stories of other men, he creates a unique social history which reclaims the past.

A University of Otago graduate living in Auckland, Brent is the author of Protest in New Zealand (2013), Re-Reading the Rainbow (2017) and Pacific History (2018).

From Suffrage to a Seat in the House

Until now, the protracted struggle for women to achieve the right to a seat in Parliament has been a neglected footnote in Zealand’s proud history of being the first country to grant women the vote. Women’s path to Parliament was actively resisted by male politicians who had only grudgingly accepted the extension of the franchise to women as well as by women who accepted the argument that women’s presence in Parliament would somehow undermine their status. But there were some who, despite constant political machinations and filibustering from inside Parliament and charges of impropriety and splitting the women’s movement on the issue, persisted in what was to be a forty-year journey from suffrage to a seat in the House.

Jenny Coleman is an associate professor in feminist history at Massey University. She has previously published Mad or Bad? The Life and Exploits of Amy Bock 1859-1943 and Polly Plum, A firm and earnest woman’s advocate – Mary Ann Colclough 1836-1885 and has also edited and introduced a reprint of the earliest sensation novel written by a woman published in New Zealand, Mary Ann Colclough’s (1866) Alone in the World, A Tale of New Zealand.

This lecture will start at 6.00pm and will be followed by drinks and light refreshments. RSVP essential to turnbullfriends@gmail.com

Singing the Trail: The Story of Mapping Aotearoa New Zealand

John McCrystal of Wellington has worked as a freelance writer since 1996, contributing to most of New Zealand’s leading newspapers and magazines. Singing the Trail is the story of New Zealand through its maps – and the story of the explorers who made those maps.

John discussed oral maps made by early Polynesian and Maori settlers: waypoints, lists of places in songs, chants, karakia and stories that showed direction. Centuries later came the great navigators, Abel Tasman and then James Cook. And finally it was the turn of the surveyors, explorers, rockhounds, gold diggers and politicians to negotiate the internal detail. His lively talk showed exactly why maps and charts have always fascinated him. 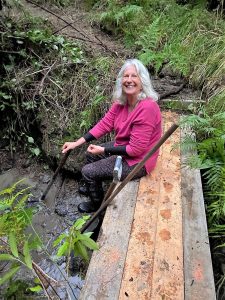 “Knowledge is a Blessing on your Mind: Whakapapa, Science and History“

Anthropologist and historian Dame Anne is a staunch supporter of the Alexander Turnbull Library, and has drawn on material in the collections for many years. She is also an environmentalist, committed to the river restoration project, ‘Let the River Speak’, which looks at the ways people, water, land and animals can thrive together.

The FoTL 2020 FOUNDER LECTURE was rescheduled from 14 September 2020. It was recorded and we hope to have a link to it available soon.

Watch this session at home: now a video on YouTube. Link is Minnie Dean: Villain or Victim? – YouTube

Amaury da Cunha, the French writer in residence at Randell Cottage in Thorndon, spent much of his time working on a book about Minnie Dean the infamous ‘baby farmer’ in Southland, his research connecting him with Karen Zelas, the Christchurch author of The Trials of Minnie Dean: A Verse Biography, which is being developed into a one-woman play. Both authors were in conversation with publisher Mary McCallum, talking about their shared fascination and their research, which included use of the Alexander Turnbull Library and National Library archives. Minnie Dean’s story continues to fascinate people. She was the first – and only – woman to be hanged in New Zealand. But was she a baby farmer and child murderer, or hardworking wife and mother, supporting her family by caring for unwanted children in a society that shunned her? 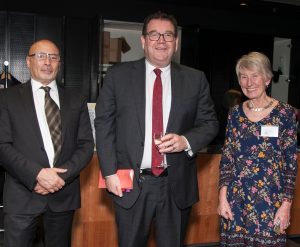 On Thursday 30 July at 6.00pm: We welcomed Hon Grant Robertson, Associate Minister for Arts, Culture & Heritage, who came to help us celebrate the centenary of the opening of the Alexander Turnbull Library in 1920. 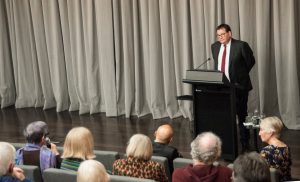 Fragile yet fearsome, New Zealand’s subAntarctic islands are home to otherworldly plants and wildlife. They have also seen two centuries’ worth of human triumphs and tragedies. Three-time subAntarctic voyager Derek Lightbourne took his audience on a fascinating journey to these wild islands via a slideshow recalling the struggles of would-be settlers and shipwrecked castaways.

Wellington author Shona Riddell was unable to attend to give her personal perspective, but Derek talked about Shona’s latest book ‘Trial of Strength, adventures and misadventures of the wild and remote subAntarctic islands‘ (which she researched in the Turnbull Library). She was able to obtain unpublished manuscripts and papers, including her great great grandmother Harriett Cripp’s 1851 birth certificate from Auckland Island, as well as written accounts of life during the same era.

A Communist in the Family: Searching for Rewi Alley

Wellington novelist Elspeth Sandys (pictured right) has published nine novels, two collections of short stories and two memoirs. She has written extensively for the BBC and for RNZ as well as for TV and film.

A Communist in the Family: Searching for Rewi Alley is a beautifully written multi-layered narrative, part-biography, part-travel journal, part-literary commentary. She talked about Rewi’s family connections and the way that his many diary entries illuminate his experiences in China. By placing the man, Rewi, and his work in the context of his time, Elspeth gave us personal insights into the life of this extraordinary New Zealander.

“Five years and 359 days with the 2nd NZ Division”

Elizabeth Kay talked about researching the story of her father, Sir Edward Norman, and 25 Battalion after reading Eddie’s war-time letters to her mother, Margaret. Her book, Eddie Norman and 25 Battalion, covers the journey of 2 NZ Division as it fought its way across North Africa and through Italy. Using Eddie’s letters and extensive further research, it tells a personal story in the wider context of WWII. Elizabeth is a well-known Wellington resident, with a Post Graduate Diploma in Art and Architecture from Victoria University of Wellington, where she taught History of Architecture for over a decade.

On Wed 2 September at 5.30pm, historian Rhys Richards spoke on 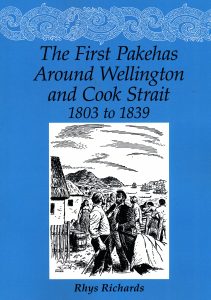 Explorers and sailors, sealers and whalers, flax traders and land speculators: just who were the early European visitors and residents who made the region around Whanganui-a-Tara their home well before the arrival of the ‘official’ permanent settlers of Wellington in 1840? The nobs and snobs of the New Zealand Company sought to ignore all pākehā residents and visitors who were present before they began to replicate an ideal ‘English society’ in the new colony.  Rhys Richards has devoted many years to researching the commercial explorers engaging in extensive trade with local Māori long before 1840. His new book, The First Pakehas Around Wellington and Cook Strait 1803 to 1839, seeks to bring these figures “out of the shadows of our nation’s history and to accord them the role they deserve in our local history.”

On Wednesday 28 October at 5.30pm – Sarah Shieff spoke on

Sarah Shieff is Associate Professor of English in the School of Arts, University of Waikato. She was the recipient of the 2020 FoTL research grant, to assist her latest project to publish a collection of the letters of Allen Curnow ONZ CBE (1911-2001). She believes that publishing Curnow’s letters will go some way to make up for the fact that he never wrote his own autobiography.

Her Letters of Denis Glover (Otago University Press) is to be published in late November, and she has previously published Letters of Frank Sargeson (Random House 2012). As well as preparing a scholarly edition of Curnow’s letters for publication, she plans to develop a fully searchable database that will assist future scholars. Allen Curnow’s oldest and closest friend was Denis Glover, hence the subtitle of her talk: A Friendship in Letters.

‘FIGHT FOR THE FORESTS’

Paul Bensemann presented the remarkable story of how a group of young activists became aware of government plans to mill vast areas of West Coast beech forest and began campaigning to halt this.

From small beginnings, a larger movement grew, initially centred on the work of the Native Forests Action Council, and eventually Forest and Bird and Native Forest Action. Paul explained that he had spent time at the Turnbull Library, using the Sir Charles Fleming and Action for Environment collections. He also interviewed many campaigners and collected old photographs to supplement photographer Craig Potton’s beautiful forest scenes. The book was a finalist in the 2019 Ockham NZ Book Awards.

Edward Jerningham Wakefield was the wayward, headstrong ‘wild-child’ of the Wakefield family that set up the New Zealand Company to bring the first settlers to this country. His story is told through the eyes of bookkeeper Arthur Lugg, who is tasked by Colonel William Wakefield to keep tabs on his brilliant but unstable nephew. But trouble brews between settlers, government, missionaries and Māori over land and souls and rights, and Jerningham is at the heart of it. Alive with historical detail, Jerningham tells a vivid and important story of Wellington’s colonial beginnings and of a charismatic young man’s rise and inevitable fall.

Cristina Sanders’ book “Jerningham” was published by The Cuba Press in June 2020.

For the latest news, see the Bulletin Board.