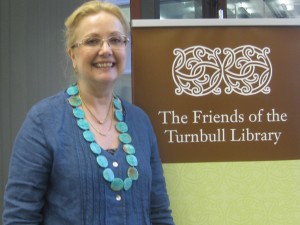 Gerri Kimber at the National Library on 4 August

UK researcher Dr Gerri Kimber has been visiting New Zealand for the fourth time in her diligent search for more information about Katherine Mansfield. Her latest trip is as the 2015 recipient of the Friends of Turnbull Library Research Grant, investigating KM’s early years in Wellington.

Her public talk at the National Library on 4 August, called Tea, Zen and Cosmic Anatomy: the mysticism of Katherine Mansfield drew connections in Mansfield’s literary and personal enthusiasm for Japanese culture, evidence of her early reading of The Book of Tea, and analysis of poems written in 1909-10. Gerri explained that Mansfield took to wearing a kimono at home, read the poems of Yone Noguchi and talked about visiting Japan. This was at the time of the enormously influential Japanese-British Exhibition in London, and Gerri entranced her audience with her comment on Mansfield’s short Japanese-style bob hairstyle was similar to that of a Japanese doll available for sale at the huge exposition!