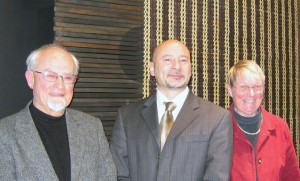 Alexander Turnbull and his Library

In founding his library, Alexander Turnbull intended that it should become not merely an historic collection of books on New Zealand but a living record of the new nation he saw in the making. His dream has been realised, and the library he began is today the acknowledged source for information on New Zealand and the Pacific area.

Alexander Horsburgh Turnbull, born in Wellington in 1868, established a highly successful trading business here and owned one of the finest houses in the growing capital city.

The son of Walter Turnbull, a Scottish merchant, he was educated in England at Dulwich College and did not return to New Zealand until he was 17 years of age. He made the conventional tour of the scenic wonders, the Pink and White Terraces, Lake Manapouri and Lake Wakatipu, and then returned to Britain where he led the gay social life of a young man with great expectations.

But the visit to his native country had inspired an interest in collecting manuscripts, books and paintings concerning New Zealand. Beginning with such classics as Cook’s Voyages, and “The New Zealanders Illustrated” by Angas, the young Turnbull gathered the nucleus of a library by the age of 21.

After his return to Wellington, his agents scoured the world for “unique works, manuscripts, early newspapers, pamphlets, early sketches…” He told the famous London literary agent Quaritch that his New Zealand collection was to be made “as complete as possible…all inclusive.”

His collections multiplied to include Maori artifacts and carvings; his interests widened to include Australia and the Pacific Islands in his rapidly growing library.
All the New Zealand classics were acquired – Governor Hobson’s first proclamation, the Hicks log of Cook’s first voyage and Captain Cook’s paintings, sketches by early artists.

As the early 1900s slipped by, Turnbull dedicated more of his energies to the self-appointed task of building a national collection.

“Mr Alex, of course, lived only for his books,” said his housekeeper. “ He was very reserved, almost a man of silence. He had the books even on the beds in the spare room. Cases of books came every other mail. He had his agents everywhere buying for him. Books filled his mind.” 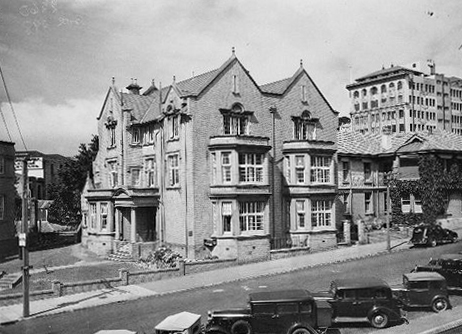 With the sale of the family home, Elibank, Turnbull moved with his books into the brick residence he built on the family property opposite Parliament House in Bowen Street.

Turnbull died after a sudden illness in his 50th year of age in 1918, leaving his library to the King, to be “a…Reference Library in the City of Wellington…the contents…kept together as the Nucleus of a New Zealand National Collection.”

Until 1973 the library was contained in his home in Bowen Street. By this stage the number of books had trebled from the 55,000 left by Turnbull, and the old building could no longer accommodate them. The library was moved temporarily to The Terrace until the new National Library of which the Turnbull is now a part was established on a new site opposite the Wellington Cathedral in Molesworth Street.

Alexander Turnbull’s relatively modest initial investment of less than a million dollars in present-day values is now worth more than a hundred times as much. But it is not the cash value of the Library that is really important; as an irreplaceable part of New Zealand’s culture it is beyond price. And, indeed, at least one third of the Library’s holdings could never be replaced since so many items are unique or excessively rare.

The Turnbull collections constitute an outstanding library of world class, broadly specialising in both English literature and in Pacific and New Zealand history and literature. The rare book collection is strong in first and special editions of works of English literature with emphasis on poetry and drama, the 17th and 18th centuries being well represented. Mr Turnbull had an especial interest in Milton, and the Library has continued to build on his foundation, creating one of the world’s best collections of Milton and Miltoniana.

The New Zealand and Pacific Book Collection, which covers topics such as Maori and Pacific Island languages, voyages, history, biography and literature, has been developed from the original bequest of Alexander Turnbull in 1918. The Library adds about 10,000 items to the collection each year, through legal deposit, purchase and donation.

Alexander Turnbull’s intentions have thus become National Library policy, to collect every publication written about New Zealand and to enrich the printed record with letters, diaries and notebooks, the archives of business firms, societies and trade unions, drawings, engravings, paintings and photographs, maps and plans.
The collections were built for reference and research and – although items are not available for loan to the public except for limited library interloan – the Library plays an essential role in supporting the endeavours of scholars, writers and researchers. In 2007 some 27,000 researchers were assisted by staff directly, while many thousands more used the Library online. Today the Library routinely responds to a wide and varied range of requests for digital copies of images, and many hundreds of New Zealand publications draw directly on the collections each year.

The Endowment Trust, initiated by a gift from Sir George and Lady Shirtcliffe in 1935, has provided money for the purchase of rare books, manuscripts and pictures beyond the Library’s normal resources. Thousands of donations and bequests, from single volumes to the $45,000 H.B. Fleck bequest in 1970, have enriched the collections over the years. The Endowment Trust also manages the Douglas Lilburn Trust, to foster and promote New Zealand music, the Jack Ilott Oral History Education Fund, and the Research Fund.

Alexander Turnbull’s respect for knowledge and the documents of scholarship make his collection the most valuable investment ever made by one man for the public of New Zealand. Alexander Turnbull’s grave is in the Bolton Street Cemetery in Wellington, just five minutes’ walk from the library which perpetuates his name.
J. E. Traue
Chief Librarian 1973-1990 (revised 2008)

Merger of Library and Archives into Department of Internal Affairs

Since 2011, the National Library of New Zealand, of which the Alexander Turnbull Library is part, has been integrated into the Department of Internal Affairs (DIA), alongside Archives New Zealand. This merger was proposed by the Government in 2010 and was achieved through legislation that was opposed by the Friends of the Turnbull Library. The various statements and extracts set out on this history of the merger page all relate to this 2010 lead-up to the merger.