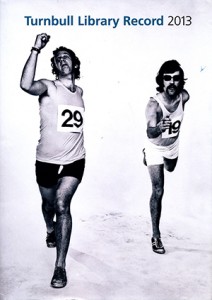 Volume 45 is devoted to New Zealand’s sporting life and culture.

The Remarkable Mrs Wiltshire, “Greatest Female Pedestrienne in the World!”. David Colquhoun tells the story of 7-stone (49kg) Catherine Wiltshire, who successfully completed a 100-mile walk in 24 hours in 1876.

“The Axe is the Pioneer of Civilisation”: Competitive Wood Chopping and New Zealand Sporting Culture, 1890-1914. Greg Ryan explores the emergence and acceptance of competitive wood chopping in a context of professional sports.

Fancy Footwork: The Sporting Metaphor in New Zealand Political Cartoons. Ian Grant sheds light on the increasing use of competitive sporting imagery – especially boxing, wrestling and rugby – in political cartoons since the 1870s.

A Window into Race Relations c. 1956: Using Cartoons as a Historical Source. Paul Diamond examines two cartoons – “contemporary statements about race relations” – published at the time of a rugby match between the Springboks and New Zealand Maori in August 1956.

David Colquhoun has been Curator of Manuscripts at ATL since 1989, and his published work includes Wellingtonians: From the Turnbull Library Collections (2011).
Walter Cook has worked at ATL since 1986 and has pursued an interest in applied art for many years.
Paul Diamond is Curator, Maori, at ATL, and his published work includes Makereti: Taking Māori to the World (2007).
Ian F Grant is a publisher and distinguished writer whose passion for cartoons led him to found the New Zealand Cartoon Archive 20 years ago.
Charlotte Macdonald is Professor of History at Victoria University of Wellington, whose most recent book is Strong, Beautiful and Modern: National Fitness in Britain, New Zealand, Australia and Canada (2011).
Greg Ryan is Dean of the Faculty of Environment, Society and Design at Lincoln University, and has published widely on sport and sporting history.